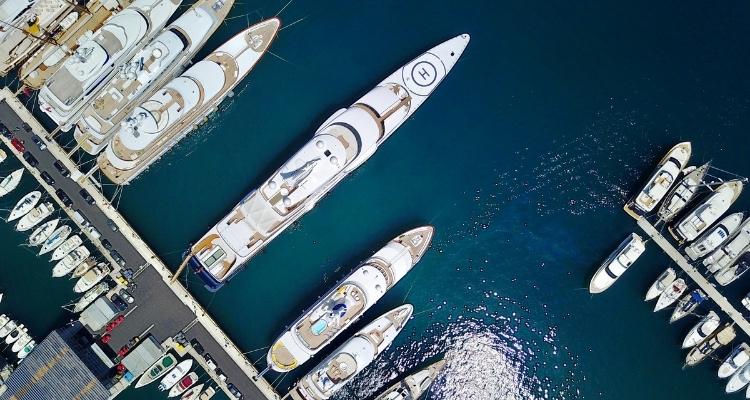 A superyacht is a traditional object used by billionaires to show their affluence and power. The most expensive yachts in the world are true works of art: they look like real palaces on the water made of the best premium quality materials. In this article, we will make a tour of the world’s top yachts in 2022 to see their unique features and look at the personalities of the billionaires they belong to.

Our experts can provide assistance in the registration of yachts in offshore jurisdictions. We also help to establish foreign companies and trusts, open foreign bank accounts, and apply for a residence permit or second citizenship in different countries of the world. To make an appointment, write an email to the address provided at the end of the article.

The gold-plated rooms of the world’s most expensive yachts in the world are specially made to give their owners maximum comfort and embody the concept of luxury living to the fullest extent possible. A ritzy yacht contains several swimming pools, dance floors, movie halls, bars and lounges, and also various amenities suitable for billionaires who own these masterpieces.

Each yacht is an elegant, stunningly beautiful vessel equipped with some of the best engines in the world. She plows the seas at high speeds, and no passenger feels the slightest discomfort. The materials used to build the most expensive yachts are of the highest quality to ensure that shine and durability will satisfy the most demanding tastes.

The largest and most expensive yachts in the world are often called superyachts because of their size and magnificence, and the process of boarding is a separate art that has its own style: the owners land their helicopters on the decks of yachts, which is a spectacular sight associated with ultimate luxury.

Our Top 10 list of the most expensive yachts in the world starts with Pelorus, a peculiar vessel that stands apart from others. This is one of the largest yachts in the world built at Lürssen shipyard in 2003. Her current owner, a billionaire and Hong Kong tycoon Samuel Tak Lee, bought the vessel from an unnamed member of the UAE royal family.

The yacht, named after the Greek word pelorious (which means “huge”), is 115 meters long. The interior of one of the most expensive vessels in the world was designed by Terence Disdale, while the exterior is a work of Tim Heywood.

Two Wärtsilä engines enable the yacht to reach a speed of 20 knots. One of her notable and expensive features is a private deck adjacent to the master bedroom which is not visible from either side of the vessel.

Pelorus often changed owners: she used to belong to the American movie mogul David Geffen, and before that, it was Roman Abramovich who bought her from a Saudi Arabian businessman.

When the expensive vessel was owned by Abramovich, John Terry and Frank Lampard, two legends of Chelsea Football Club, paid a visit to the yacht.

The 15,850-ton Al Said is the largest yacht in the world. She is an expensive 154-metre-long vessel built at a Lürssen shipyard in 2008. Her exterior was designed by Espen Øino, while the interior is the masterpiece of the world-famous RWD company.

The yacht, named after the late Sultan Qaboos bin Said Al Said of Oman, is now owned by an unnamed member of Oman’s royal family. The details of the luxury facilities available at the expensive yacht are not known, but one of her most famous features is a concert hall that can accommodate an orchestra of 50 people.

The expensive Al Said yacht is equipped with two MTU diesel engines with a capacity of 11,149 horsepower, which provide a maximum cruising speed of 25 knots.

Radiant, one of the most expensive yachts in the world, belongs to a businessman from the Emirates Abdullah Al Futtaim. The luxury vessel was built at a Lürssen shipyard in 2009; her appearance reflects the style of Tim Heywood, while the interiors were created by Glenn Pushelberg.

The deck of one of the world’s most expensive yachts is made of teak wood, and her exterior is lined with rolled aluminum. Radiant is 110 meters long and has a top speed of 21 knots thanks to her two 8,715 horsepower MTU diesel engines. Like other superyachts of this type, Radiant guarantees the comfort of her passengers by offering amenities such as a beach club, massage room, and swimming pools.

One of its unique features is a water cannon that the vessel can use against pirates (they pose a serious threat in waters off the coast of Somalia).

Mohammed bin Salman is the Crown Prince of the Kingdom of Saudi Arabia, one of the most influential people in the world. His most expensive yacht, Serene, is equipped with powerful engines and perfectly complements the status of her royal owner worldwide.

Serene is equipped with eight 2,828 horsepower MTU diesel-electric motors, which provide the vessel with a maximum speed of 25 knots. She can travel 6,000 nautical miles at a speed of 15 knots with a full 800,000-liter tank.

The 133.9-meter-long superyacht was built by the Italian shipbuilding company Fincantieri for the Russian vodka tycoon Yuri Shefler in 2011. Her exterior design was elaborated by Espen Øino, and her interior is the creation of Reymond Langton Design. Although it is unclear when the Saudi royal family bought the expensive yacht from Shefler, the amount that the Crown Prince reportedly paid was 500 million euros. At present, one of the most expensive yachts in the world is estimated at 330 million US dollars.

As for comfort, the vessel is known as the “Floating Palace” as she has all the amenities that other expensive yachts in the world can boast of, and much more. You will find here a snow room, a steam room, an open-air cinema, a seawater pool, a hammam, a beauty salon, a piano room, a surveillance room, a beach club, and a dance floor, as well as many luxury amenities. Inside the yacht, there is also a viewing platform for observing marine life. Sounds impressive, right?

One of the most famous individuals who had rented the yacht before she was purchased by the Crown Prince of Saudi Arabia was the billionaire Bill Gates who paid $5 million a week.

Most of the expensive yachts are owned by the residents of the UAE, and the expensive vessel “Dubai”, named after one of the largest cities in the country of the Persian Gulf, is no exception.

One of the world’s most expensive yachts is said to be owned by the Prime Minister of the UAE and the ruler of Dubai, Mohammed bin Rashid Al Maktoum. The yacht was built by Blohm + Voss in 2006 for Prince Jeffrey Bolkiah of Brunei. Her 161.8-meter-long interiors were made by Platinum Yachts, and the yacht herself was designed by Andrew Winch.

She is one of the most extravagant and expensive yachts in the world equipped with a mosaic pool, several sunbathing areas and a jacuzzi, a two-level owner’s deck, a helipad, and a round glass staircase that changes its color when illuminated from above.

One of the world’s most expensive mega yachts, Motor Yacht A, belongs to the Russian billionaire Andrey Melnichenko.

The exterior design of the yacht is truly unique: she resembles an invisible warship, in particular – a US Navy Zumwalt class destroyer. She was built by Blohm + Voss in 2008 and designed by Martin Francis and Philippe Starck.

Motor Yacht A is 122 meters long, and the main bedroom of the expensive vessel has an area of 232 square meters. This unique yacht, considered to be one of the largest luxury vessels in the world, has a glass-bottomed swimming pool above the disco (in addition to two ordinary swimming pools). She also contains a helicopter hangar and a nine-meter-long boat on board. In addition, the walls separating the six guest cabins can be moved to create four spacious cabins.

The superyacht, launched in 2012, was designed by Tim Heywood, while Terence Disdale Design worked on the impressive interior of the world’s greatest yacht.

The 7,990-horsepower engine of the 1,147-meter-long yacht allows you to develop a maximum speed of about 23 knots. Two diesel generators provide power to the stabilizers of all onboard systems.

The 179-meter-long vessel is the largest private yacht in the world — a record that has been held since 2013. She is owned by Sheikh Khalifa Bin Zayed Al Nahyan, another UAE resident.

The yacht, built by the German shipbuilding company Lürssen Yachts, is a wonderful and expensive masterpiece where luxury is combined with technology. Azzam has its own missile defense system and a Bullet Proof Master Suite. The vessel is so finely balanced that the chandelier inside the boat does not even rattle at maximum speed. In addition, it is one of the fastest yachts in the world, reaching a speed of 30 knots with the help of its four engines that have a total capacity of 35,048 kW.

Eclipse is a 162.5-meter-long superyacht owned by former Chelsea boss and Russian billionaire Roman Abramovich, and she is also one of the most expensive private yachts in the world.

Eclipse has a missile detection system and bulletproof windows to protect passengers in the main cabin. Abramovich’s yacht, which he bought in 2010, develops a maximum speed of 21 knots and a maximum range of 6,000 nautical miles with a full tank. The vessel was designed by Terry Disdale and built by Blohm + Voss, a German shipbuilding company.

After 24 February, the United Kingdom imposed sanctions on Abramovich, after which his expensive yacht was reportedly seen in Turkey where she could not be arrested.

She was the largest yacht in the world until the President of the UAE and the Emir of Abu Dhabi, Khalifa bin Zayed Al Nahyan, bought the superyacht Azzam in 2013.

In addition to Eclipse, Abramovich owns two more superyachts, Solaris and Sussurro. The Russian billionaire used to own several yachts, making him the owner of the largest number of megayachts in the world in a lifetime.

Finally, here is the most expensive yacht in the world – History Supreme. She was designed by Stuart Hughes for an anonymous Malaysian businessman. Reports suggest that the businessman is Robert Kuok, founder of Shangri-La Hotels and Resorts: according to Forbes, he is estimated to be worth $12 billion.

It took three years to build a би-meter yacht, and about 100,000 kg of pure gold and platinum were used in the construction of this extravagant vessel. One prominent area where a large amount of gold was used is the base of the yacht covered in a thin sheet of precious metal. Other areas decorated with gold include the deck, railings, dining area, and even the anchor.

There is an interesting luxurious interior item in the main bedroom of the yacht: a real Tyrannosaurus bone mounted on a wall made of meteorite stone.

What Makes a Yacht Expensive?

Technology and luxury amenities also determine the cost of the vessel. For example, both Eclipse and Azzam are equipped with missile defense systems. In addition, the latter is also one of the fastest yachts in the world.

On the other hand, Serene provides her passengers with amenities that most extravagant yachts cannot match.

Where Do the Owners of the Most Expensive Yachts Come From?

As previously reported, the most expensive yacht is reportedly owned by Malaysian businessman Robert Kuok. However, most of the owners of mega yachts come from the Gulf countries, especially the UAE and Saudi Arabia.

To receive advice on services from our experts, write an email to info@offshore-pro.info.