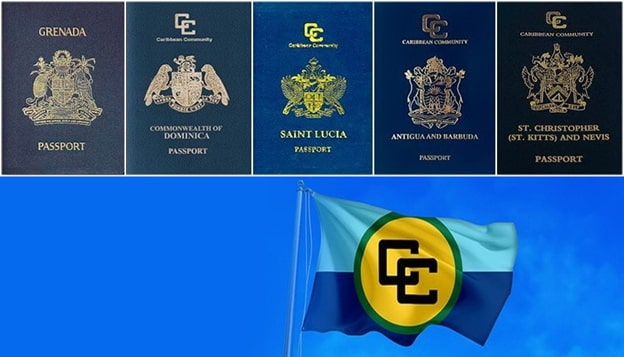 Why Invest in CARICOM Passports?

CARICOM passports issued by 15 Caribbean countries are much more than just travel documents. They do come with the right to travel freely across the Caribbean region and on visa-free/visa-on-arrival/electronic visa terms to many countries worldwide. Besides, this ID provides its holder some other privileges.

The Caribbean Community (CARICOM) embraces 20 countries (15 full members and 5 associate members) populated by about 16 million people. It can be compared with the Schengen zone by the diversity of ethnic, linguistic, economic, social, and political features. The member-states maintain the principles of a single market, a single economy, and joint efforts in education, security, foreign policy, sustainable development, trade, transportation, healthcare, other important areas. Since 2020, the fight against the COVID-19 pandemic has been the CARICOM shared concern.

CARICOM passports and citizenship issued by the Member-states provide trade preferences. The visa-free access to all countries in the region is an important advantage of the passport holders engaged in business. This article considers the key benefits and practical aspects of this program.

History of the Caribbean Community and  CARICOM passports

CARICOM was founded in 1973 by the English-speaking countries of the Caribbean, with the assistance of former metropolises from the Old World. The main goal was to promote economic integration and cooperation among the members by creating a single market of labor, goods, and services for the Caribbean Community.

The list of CARICOM goals includes the following ones:

Which states are eligible to grant a CARICOM passport? The current list of member jurisdictions of the Caribbean Community is as follows:

Please note: Some member-states of the Caribbean Community do not issue the regional CARICOM Passports to their citizens – for example Commonwealth of the Bahamas, Haiti, and Montserrat which is actually British.

The CARICOM passport has three varieties, which differ in color scheme:

This ID can be obtained from any of the CARICOM member-states, and hence is decorated with the national symbols of the issuing state (the coat of arms and name of the country). All CARICOM passports bear the name of the Caribbean Community and the emblem of this regional organization (two capital letters “C”). The first such document was issued by the authorities of the Republic of Suriname, and its President became the first-ever CARICOM passport owner.

Modern CARICOM passports are equipped with electronic microchips designed to store the holder’s biometric data and possibly other relevant information. For example, information about vaccinations received.

The value of the CARICOM passports for international travelers and businessmen

A typical CARICOM passport offers its holder visa-free /visa-on-arrival/electronic visa access to nearly 130 countries and territories, including the Schengen states in Europe, and the United Kingdom.

Nationals of member-states of the Organization of Eastern Caribbean States (OECS), including citizens of Antigua, St. Vincent and the Grenadines, the Commonwealth of Dominica, Grenada, St. Kitts and Nevis, St.Lucia (these jurisdictions are also CARICOM members) may use for travel within the OECS region not only the CARICOM passports but also the following IDs issued by the member-states:

Freedom of intra-regional travel with the CARICOM passport

Citizens of any CARICOM country may enter any other member-state of the Community enjoying the right to stay for 6 months. In other words, the regional rules eliminate the need for visa arrangements. A special fast-track corridor is also available for CARICOM nationals at Immigration Control.

Citizens of certain CARICOM countries are not automatically entitled to exercise the following rights in another member-state:

Citizens of certain CARICOM member-states wishing to remain in the territory of another member-state for more than 6months or exercise the above-mentioned activities may only do so according to the relevant CARICOM regulations/regimes/national laws of the host state.

CARICOM nationals wishing to change the status of a Guest to Resident while staying in another member-state need to apply to the appropriate authorities and submit the documents certifying this person’s CARICOM citizenship/service provider qualification/work permit/residence permit.

Having officially obtained the Resident status, you can change your Social Security/Pension address from one CARICOM state to another.

Free labor migration in the Caribbean thanks to the CARICOM passport

The following categories of CARICOM citizens may seek employment in any of the member-states without additional bureaucratic procedures:

All other citizens are usually required to obtain the CARICOM Skills Certificates, also known as the CARICOM Certificate of Recognition of Qualifications.

Tax and banking advantages of the CARICOM Passport

For example, Antigua and St. Kitts do not stipulate any personal income tax for fiscal residents. Both states grant economic citizenship by investment very quickly. But when choosing a CARICOM Investor Passport for tax purposes, one should remember that the mere fact of obtaining such a document will not automatically entitle him/her to a lower tax. A tax residency certificate will be required. You can obtain such a certificate by residing in the relevant state for most of the reporting year.

Not a single CARICOM state charges or is going to charge the personal income tax based on citizenship. This residence-based approach differs from, for example, the US citizenship-based income tax. Several EU states are currently discussing proposals to introduce the same CBT principle.

We advise you, before establishing tax residency/opening an offshore account or business as a CARICOM passport holder, you should consult with an experienced tax professional.

You are welcome to book a FREE one-on-one online consultation with our experts by writing to our e-mail address above this article.

Caribbean countries are becoming increasingly popular with wealthy investors/successful businessmen concerned about the privacy and security of personal data, as such jurisdictions usually do not disclose details of investor’s business activities to third parties.

For example, Nevis is now one of the most sought-after jurisdictions offering offshore banking, insurance, and company formation opportunities plus strict security and asset protection provisions.

A growing number of investors prefer Nevis to the British Virgin Islands when opening offshore accounts, as the BVI banking industry is becoming over-regulated.

How to obtain a CARICOM passport through economic citizenship: 5 options

Most investors obtain a CARICOM passport legally, quickly, and seamlessly by applying for Caribbean economic citizenship by an investment/charity donation.

If you choose to donate, please note the Antigua program – it offers top-notch value for money. This option is especially attractive to large families with children. Dominica and St. Lucia offer the least costly options of citizenship in the Caribbean for bachelors and bachelorettes who decide to make non-reimbursable donations.

The sums in the table do not include administrative fees (passport processing, applicant’s data verification, application processing) and the fee for the services of the accredited immigration agent. Please note that it is forbidden to apply for a CARICOM investor passport directly to the host country authorities, one can apply only through a licensed agent.

As for the passport/citizenship by investment in some real estate/business/securities, the situation is less straightforward and depends on the investment. The applicant should take into account the minimum mandatory holding period of the asset ownership and the period of the relevant deposit ‘freeze’.

As you will see in the table below, the option offered in the Commonwealth of Dominica is the cheapest and most advantageous in terms of the equity holding period. But it is important to remember that only buyers who are not going to participate in the local economic citizenship program are allowed to sell the asset at the end of the three-year mandatory holding period. This makes the asset less liquid.

Living, working, and investing abroad is an extremely rewarding experience personally, professionally, financially, and culturally. Millions of people find living abroad fascinating and prestigious. The CARICOM Passport allows you to move to one of the most picturesque parts of the world, the Caribbean.

The decision to invest in a CARICOM passport and economic citizenship by real estate investment should involve different considerations.  For example, due to Grenada’s geographical position and weather conditions, investment in the local property is the most favorable and popular option in the region. The Federation of St Kitts and Nevis offers an Accelerated Application Process (AAP) – the fastest economic citizenship option (45-60 days) for an extra fee. Other aspects should also be given attention. You are welcome to send your questions to our experts and book a FREE online consultation to define and discuss your best opportunities.

Beware of scams! Investment Migration is a regulated activity in Antigua & Barbuda, Dominica, Grenada, St Kitts and Nevis, and St Lucia. There have been a number of scams so it is important only to work with government licensed agents and their regulated sub-agents. Offshore Pro Group, the publishers of International Wealth, will be happy to present our credentials as regulated sub-agents to any serious clients!

How long is a CARICOM passport valid?

It depends on the country. For example, the Jamaican passport is valid for a decade for an adult and five years for children aged 17 and younger. Most member-states of the Caribbean Community offer passports for similar validity periods.

What is a CARICOM passport?

How much does a CARICOM Investor Passport cost?

If you apply for such a document through an economic citizenship program, the investment will start from USD 100,000 (the lowest in the region rates accepted in the Commonwealth of Dominica and St. Lucia).

Please help us make the portal even more informative, up-to-date, and valuable for you and your business. Отмена
Invest in the Azores and Acquire Legal Residence in Portugal
03 Aug 2021
Purchase an Apartment in Ritz-Carlton Residences Istanbul
03 Aug 2021
Consultations on Tax Residency and How to Choose a Suitable Jurisdiction
02 Aug 2021
17 reasons to choose the ‘green’ passport of Dominica by investment
31 Jul 2021
5 Ways to Save Money by Acquiring Foreign Citizenship by Investment
30 Jul 2021
Passport of Antigua and Barbuda for investment: calculating the cost
29 Jul 2021
Consultations on how to choose the residence-by-investment and Golden Visa solutions
29 Jul 2021
How to purchase property in Portugal and acquire a residence permit: a complete guide
28 Jul 2021
Purchase an apartment in JB Panorama complex, Istanbul
28 Jul 2021
Citizenship by investment: a dozen tips on avoiding fraudsters
27 Jul 2021
Setting Up an Offshore Company
26 Jul 2021
Offshore Companies: Setup vs Purchase, Specifics, Reasons, Advantages, Risks, Value
26 Jul 2021