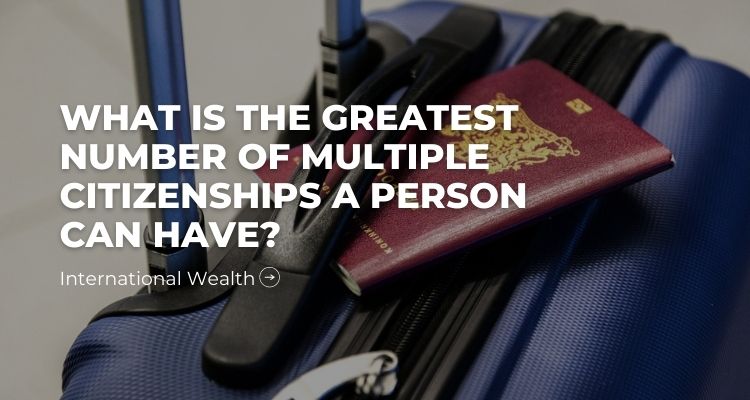 What is the maximum number of citizenships a person can have in 2021?

In a perfect world there would be no limit to the number of citizenships that an individual can have. It should be a right of every person to obtain (legally) a second, or third or any number of nationalities. People do this for different reasons. If their home government was perfect, a second nationality would not be necessary. But since we all know this does not exist, a second or more nationalities is desirable. The most common reasons for obtaining a second nationality are listed below:

It is important at this point to distinguish between someone having DUAL NATIONALITY and having a second (or multiple) nationalit(ies). When the country of your birth gives permission to an individual to have a second or more nationality, that is classified as the individual having dual nationality. This is determined by the governments of the 2 countries having an agreement allowing this, thereby receiving consent from the original country. If no agreement is in place then the individual simply has a second nationality. Examples of dual nationality agreements are:

There are a couple of important things that must be mentioned about dual nationality: the country that you are in presently will dictate the laws that apply to you. So if an individual has Canadian and French nationality, if the person is in Canada, then only Canadian laws will apply. There is no protection for the person using French law. Secondly, when travelling to the country that has the dual nationality, it is mandatory that the traveler use that particular passport. For example, a person with Canada and France passports, if that person is travelling to Canada, then the Canadian passport must be used for entry into Canada. Attempting to use an alternative passport can result in penalties (financial or possibly imprisonment).

With this in mind, we can now discuss specific countries within the eastern bloc wrt nationalities:

A Russian citizen may have multiple nationalities. However once a second nationality is obtained the applicant has 60 days from the receipt of the second passport  to inform the Federal Migration service.

With regard to military service if a Russian is permanently living outside the country,  then he can be given an exemption from military duty.

This is an important point to consider when obtaining a second nationality. Each country has its own military service requirements that you must follow if you obtain that nationality. Rules vary depending on the jurisdiction, but this is of particular importance for Israel, which has very rigid military requirements for its citizens.

As of 2021, dual citizenship is prohibited. Last year, however, the Ukrainian government began working on introducing it into the legislation to allow multiple citizenships. Descendents of Ukrainian nationals will hopefully soon be able to obtain Ukrainian nationality while maintaining their current passport.

Also, the legislation of Ukraine allows naturalized Ukrainian citizens to retain other foreign passports on an indefinite basis.

The Constitution of Kazakhstan and the Law “On Citizenship of the Republic of Kazakhstan” state that the state does not recognize the citizenship of other countries for its citizens. Violators of these laws are subject to fines and may be expelled from the country.

The United States of America has not concluded a dual citizenship agreement with any other state in the world. Therefore, for Americans, only the concept of second citizenship applies. They can be citizens of any other country, but the US authorities will not recognize their status. For the American authorities, they remain only US citizens.

The U.S. Pledge of Allegiance, which is uttered by every applicant for American citizenship, states that he refuses to remain loyal to another country even if he remains its citizen. At the same time, he is not obliged to hand over the passports of other states.

If an American has multiple citizenships, they must still use only a U.S. passport to leave and enter the United States. Otherwise, he will be fined. On the territory of other countries, he has the right to use any other documents.

Please contact us for information pertaining to other jurisdictions.