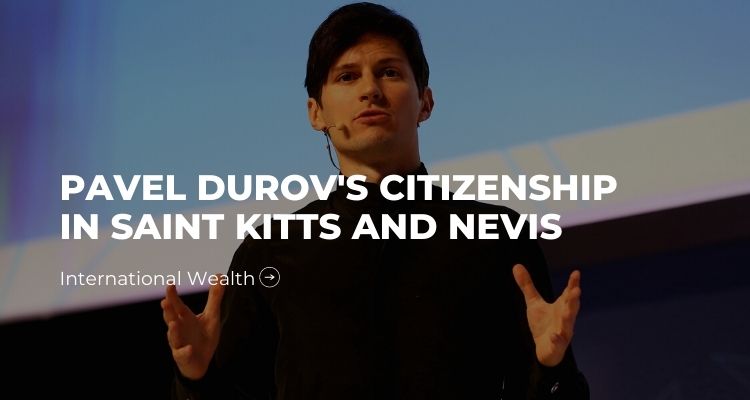 We hear so much about Citizenship by Investment in St Kitts and Nevis these days. But sometimes we need to take a step back from the theory, and look at practical examples of what successful people from around the world have really achieved with their St Kitts-Nevis citizenship.

Many people seek privacy when they apply for citizenship in St Kitts and Nevis, so it is hard to write about them, even though we see many examples of household names and celebrities receiving their new blue St Kitts and Nevis passports. One case, however, has been well publicized already so the information is in the public domain and we can use it as an example of a successful second passport case.

We are talking about a prominent Russian internet millionaire who obtained citizenship in the Caribbean not too long ago. Pavel Durov is one of the most famous people in the cyberspace of Russia, the creator and former director of the social network “VKontakte” which is wel known as the Russian equivalent of Facebook. Later, he launched the hugely successful Telegram app, that has been downloaded more than half a billion times around the world.

The news that Durov acquired a second passport from the Caribbean is hardly surprising, given the number of wealthy or freedom-loving people moving outside their native country at the moment – what with changes due to the pandemic, the price of crypto, and Biden taking up the role of President in the USA.

Durov was granted citizenship of the twin-island federation of St. Kitts and Nevis. Russian media are now calling the country “the islands of the oligarchs.” Here they might rub shoulders with, or park their yachts next to, crypto and tech millionaires from the world over who have been attracted to St Kitts and Nevis for its second passports, offshore asset protection trusts, and crypto friendly banking.

The reasons Pavel (who in many photos looks like Keanu Reeves in the role of Neo from the film The Matrix) gave for deciding to expatriate are varied – ranging from just fed up, and ending with personal freedom.

And although now Durov lives in the United Arab Emirates (UAE), where he has been given a resident visa, allowing to live quietly in the country for up to 3 years with the right of extension, he is the proud bearer of a second passport of a citizen of the Federation of St. Kitts and Nevis. A prudent man, we would say. If this is his Plan B, we are quite sure he has his Plans C and D as well!

And to be honest, this is quite a considered and strategically thought-out decision. why?

St. Kitts and Nevis is an offshore jurisdiction that has the longest history in the Citizenship by Investment business and a reliable reputation as a country that gives economic citizenship for investments. 30 years of experience – no one else has such a thing. Moreover, quite a successful experience!

Having become a citizen of this state consisting of two islands and a population of less than 50,000 people, Durov, just as you could, received freedom from income tax, inheritance tax and capital gains. Even offshore companies and asset protection trusts that can be founded here do not need to pay taxes on world income until the services are provided to residents of St. Kitts and Nevis. More recently, St Kitts and Nevis has become well known for its crypto community and crypto friendly international banking.

You can see the full list of options for an investment passport in our thematic article.

And although living on the island itself can be relatively expensive, the benefits of the passport of SKN are plentiful. Taxes have already been mentioned. The possibility of visa-free travel to more than 130 countries exists, for a start. For example, Pavel, when he was a Russian could not travel to Europe without a visa. But with the passport of St. Kitts and Nevis all the borders of Schengen and the United Kingdom are open to him.

Among other advantages of the islands is a high level of confidentiality: the islands jealously guard and protect data about their citizens (for example, the Russian media were interested when exactly Durov received citizenship, but the Prime Minister’s office refused to give information). The same can be said not only about government institutions, but also about local banks, which are famous for their reliability. In fact, unlike in many Caribbean countries, there have never been any bank failures here.

In addition to purely pragmatic benefits of second passports, the islands attract a huge number of tourists. They come here for pristine beaches, incredibly beautiful nature and great weather… but above all for the experience, topped off by the friendly island people who always hae time to stop and pass the time of day with tourists.

The sea, the sun, the bright landscape, friendly people… What else do you need?

How much does a place in paradise cost?

How much did Durov have to pay to become a citizen of St Kitts and Nevisl?

Pavel took the classic path and chose to invest in the government backed NGO – to be precise, he “invested” $250,000 in the country’s economy. He won’t see that money back, but the “investment” will be paying off over his entire lifetime, and can be passed on to his children.

In addition to the above method, during which the invested money is never returned to the depositor, there is an alternative method – investment in real estate. Just until recently, this option was less popular, but has recently taken off. Why? Because before buying a property, it could be sold in 5 years. But just sell, i.e. it could not be used again to obtain citizenship for the next person. There were few buyers..

Now, after 5 years, you can sell the purchased property, preserving their citizenship and allowing the next applicant to get a passport.

What else does the island offer for a spoiled consumer? There are places to invest in and they are chosen by the government. Particularly attractive to the likes of Pavel would be the elite developments of Christophe Harbour on St Kitts, or the Four Seasons on Nevis. Not only are these beautiful places, it is also beautiful in terms of comfort properties, which can be purchased in completely different options, ranging from joint ownership, to single.

Here are all the levels of luxury: houses, villas, hotel rooms, restaurants. Here build a huge berth for yachts, and buying a place on such a pier, you get not only a bridge and a parking space, and real land under their pier (this is not done virtually anywhere else).

Nevis every year attracts not only those who receive citizenship, but also lovers of high quality R&R. And local managers understand this perfectly: piers for luxury yachts, a terminal for private jets under construction, so that VIP clients do not stand in queues, high requirements for developers, etc.

For those of us who are merely successful but can’t afford to tie up $5 million in a luxury villa, lower cost but still high quality offerings are available starting from just $200,000. Examples include hotel rooms in the Park Hyatt, or a share of a beachfront villa in the beautiful St-Barth’s style Zenith development on Nevis.

Pavel Durov is evidently a smart guy, since he chose this country for his second citizenship. When he gets bored in the UAE or in any other corner of the world, he will be able to safely come here, lie down by the pool on a sun lounger and sip a Caribbean rum punch to feel the peace of the world.

When you get citizenship of St. Kitts and Nevis, you will be able to do just the same, and go to bed sleeping easy because you have your Plan B all wrapped up!

For a free consultation with an expert about Citizenship by Investment in St Kitts and Nevis, contact International Wealth today!