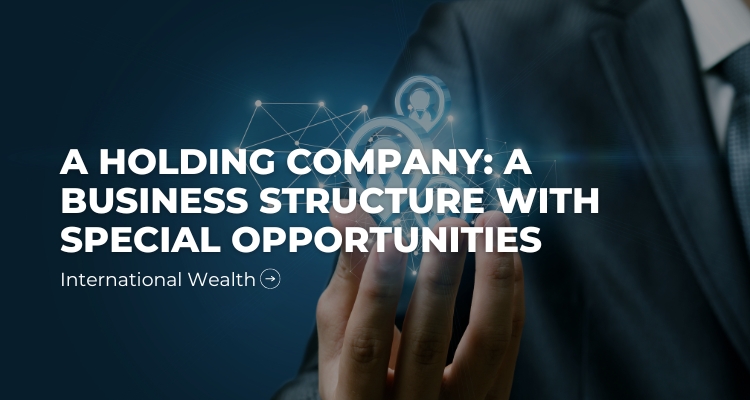 A Holding Company: All You Need to Know

Holding companies may have different structures allowing them to solve various business tasks: for example, they can be established as a corporation or an LLC. The particular choice depends on the purposes, the corporate laws of the jurisdiction where the holding company is registered, and the local tax legislation. You can combine different options and take into account the existing legal restrictions and incentives to use a holding company as an effective tool for business.

Holding companies are usually established to considerably reduce business risks, diversify operations, and reduce the tax burden. If you manage a holding company competently, you may ultimately receive higher income and benefit from strong asset protection, while your investments will be significantly reduced.

A holding company will be a logical choice if you need to expand the scope of your business activities or efficiently control multiple structural units.

A Holding Company: Control and Management

The holding company operates as a parent corporation that owns the assets or shares of other enterprises. If the parent company owns 100% of the shares or has 100% interest in another company, this entity is called a wholly-owned subsidiary. Accordingly, if the share of ownership is smaller, the entity is not considered fully owned.

Holding companies may have the same organizational and legal forms as a standard legal entity: a corporation, an LLC, or a partnership. Therefore, it is impossible to distinguish the first and the second structures at first glance.

The holding company does not differ much from standard legal entities, so the word “Holdings” is often indicated in the name to identify it. The most famous examples are ABH Holdings S.A., a Dutch investment holding company, and Berkshire Hathaway Holdings, one of the world’s largest holding companies headquartered in the United States.

You can read more on how to choose the right jurisdiction to register a holding company.

Are you planning to restructure your business to better protect your assets? Contact our experts for free advice on how to select an optimal jurisdiction to form an offshore company.

on which jurisdiction is best for
your business, preferred tax regime,
company structure.

on which jurisdiction is best for your business, preferred tax regime, company structure.

The functions of a holding company depend on its structure – however, in the majority of cases, they include owning controlling interests in its subsidiaries. This enables it to be an operating company that has a decisive voice in the day-to-day operations of subsidiaries.

Why do you need a holding company? Well, its main purpose is to protect your business and assets, including real estate and intellectual property (e.g. copyrights, trademarks, and patents).

Let me give you an example of what to use a holding company for. Imagine that there is a legal entity called “Company” that operates simultaneously in several industries, and its most profitable segments are transport services and plastics. In this business structure, both divisions are part of the same company (“Company”).

The Company owners could prevent this risk by organizing a business structure in the form of a holding company called Company Holdings and transferring the controlling stakes in Company Shipping and Company Plastic (which are two independent enterprises) to the latter. If Company Plastic goes bankrupt, its liabilities will only be limited to the assets of that company. Company Holdings can even save this enterprise by shuffling the profits of the holding company or issuing a business loan.

5 Main Types of a Holding Company

If you are going to organize an effective business structure, you should first choose the type of holding company – and the choice becomes really easy if you clearly specify the purpose of its establishment.

In practice, the most common types of holding companies are as follows:

A pure holding company does not produce goods or provide services independently. All it does is simply own the valuable assets, interests, or controlling interests of its subsidiaries. It does not carry out any activities other than control.

If a parent company owns subsidiaries in unrelated industries, it is called a conglomerate. A classic example is Berkshire Hathaway, one of the most successful companies in the world. Berkshire Hathaway has interests in well-known companies such as Dairy Queen, Clayton Homes, Duracell, and GEICO.

This type of holding company is very easy to distinguish from others: such organizations are intermediate links between a larger holding company and its smaller subsidiaries.

What type of holding company structure should be selected in each of the above examples: an LLC, a corporation, a partnership, or other? You will need to take into account corporate and tax legislation and the desired goals to make the right choice.

What is the Best Structure for a Holding Company? Examples in Business

The final decision on the future holding company structure is made by the business owner, depending on the goals and objectives. Therefore, the organizational structure of the holding company can take the form of a parent company, a conglomerate, a corporation, an LLC, etc. In addition to the company goals, the choice is also based on corporate and tax legislation.

Examples of Holding Companies and Subsidiaries

In any structure, the holding company and its subsidiaries are organized as a hierarchy. The structure of the parent company has its own business: for example, a Company Manufacturer makes aluminum parts for agricultural machinery and holds a controlling stake in Subsidiary 1 and Subsidiary 2, which produce associated industrial metals. But if Subsidiary 1 were a chain of restaurants and Subsidiary 2 were engaged in building houses, the Manufacturer Company would be a conglomerate.

What Entity Type Should a Holding Company Be? Corporation vs LLC

The difference between these forms is considerable, and we will need to carefully study the corporate legislation of the country where you are going to establish a holding company structure in order to clearly define it. If we consider American law, the difference would look as follows:

Strengths and Weaknesses of the Holding Company

Like any instrument in business, a holding company has its strengths and weaknesses, and these two sides are closely intertwined.

Advantages of a Holding Company

The administration of holding companies is quite a complicated task to handle. However, if there are in-house specialists in your company, they will surely help you optimize the fiscal burden and thus significantly reduce costs.

There are two ways of tax optimization that are practically used by holding companies:

Another advantage of the holding company structure is the limitation of the business owner’s liability.

Each subsidiary is solely responsible for its liabilities and they do not affect the holding company or other subsidiaries in the structure. That is, if a subsidiary ends the year with losses, this result does not apply to other enterprises.

Business owners distribute valuable assets between the holding company and its subsidiaries in order to ensure better protection of their property. For example, a holding company owns the license, while the licensed products are manufactured by a subsidiary. If the latter’s activities turn out to be unprofitable or even result in its bankruptcy, the creditors will naturally file lawsuits to recover their assets. As a result, the subsidiary’s property is lost, but the production license is retained. The creditors cannot reach the assets owned by the holding company under any circumstances.

You can also create a special asset holding subsidiary to retain all of your valuable assets in any situation, or a holding company can be the owner of some property that is later leased to any subsidiary (in which case it cannot be seized by the court, either).

This advantage is also related to the structural peculiarities: a holding company does not need to acquire 100% of capital or shares of its subsidiaries in order to exercise control over them: it only needs to have a controlling package, which requires less money.

A holding company with a good credit history and good financial statements will find it easier to obtain credit at a lower interest rate than a subsidiary. This is a convenient way to raise funds for a risky venture.

The holding company’s access to cheaper loans allows it to finance start-ups, and they say that it was one of the reasons why Google was transformed into a subsidiary of the new company called Alphabet. Google’s shareholders were not satisfied with the company’s investment in the field of robotics, medical sciences, and other technologies, as they seemed riskier that its traditional activities that proved to be profitable. As a result, the company’s investments were restructured and separated from its main income-generating entities (the search engine and YouTube).

A group of companies can have access to common resources and expertise in a particular field, which will help add value to the products.

A complex structure is not always the right choice, but sometimes it is indispensable. If you want to improve your business structure and ensure reliable asset protection, please contact us at info@offshore-pro.info to get professional advice. Our experts will develop the future holding company structure for you taking into account your objectives, and help with its establishment.

What is a holding company?

This is a type of company that owns a controlling interest in the capital of its subsidiaries, and this is often its main activity. But there are cases when a holding company can also conduct its own activities in a certain industry.

What is the use of a holding company for business?

The holding company is an excellent instrument for asset protection, reduction of tax liabilities, and increasing safety of the business owner’s personal finances and property.

What is the organizational structure of a holding company?

A holding company is a divisional organization. There is an entity in the center of the structure that performs the controlling functions, and there are several businesses not connected to each other that are controlled. The nature of control is financial rather than managerial.

What type of structure is a holding company?

A holding company is a mother company (a corporation or an LLC in most cases) that is not engaged in any standard business operations, like the provision of services or manufacturing of any goods. In most cases, it holds the controlling share in subsidiaries.

How are the holding companies taxed?

We cannot give you one precise answer as things depend on the jurisdiction, goal, and corporate organization. For example, if you set up an LLC, it would be tax-free as each member will be responsible for paying the appropriate taxes. Schedule a meeting with our experts to narrow down the options and get a detailed answer.

What is the best country to establish a holding company?

The situation is not stable enough to give a definite answer. However, one thing is clear: if you want as much privacy and protection as possible, establish the structural units in several jurisdictions.