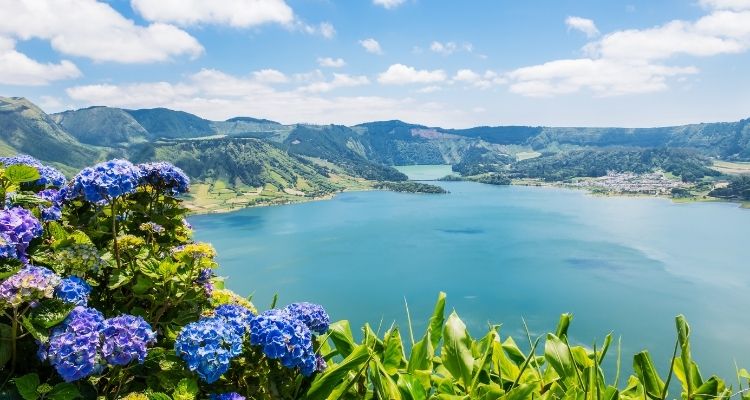 Invest in the Azores and Acquire Legal Residence in Portugal

Important changes are going to be introduced to the Portuguese immigration program beginning 2022. These changes are bound to make the Azores – an autonomous district of Portugal – especially attractive to foreign investors. First of all, the islands are a true tourists paradise. Second, you would have to invest less money if you buy property on the Azores to qualify for legal residence in Portugal than you would have to invest in the continental part of the country.

Brief information about the Azores

The Azores are traditionally divided into three groups of islands: the western, the central, and the eastern groups. The islands are extremely popular with tourists from Europe and other parts of the world. One of the best known tourist attractions is Mount Pico on the island with the same name that is the highest mountain in Portugal (2.35 thousand meters above the sea level). If you measure the height of the mountain starting at the bottom of the ocean, it is going to be the highest mountain in Europe.

Thanks to the Gulfstream, the climate there is very mild. The temperature remains very much the same throughout the year ranging between 16 and 25 degrees Celsius. The all-time maximum was 30 degrees and the all-time minimum was 3 degrees.

As the Azores is part of Portugal, naturally, they are within the EU and the Schengen zone so investing in legal residence in the Azores is investing in legal residence in Europe. At the same time, the VAT rate is lower on the Azores than it is in the continental part of Portugal. The islands are classified as an underdeveloped part of the country so the Portuguese authorities give them certain economic privileges. (The same goes for the island of Madeira.) This fact should be of interest to foreign businesspeople.

Emigration from the Azores and immigration to the islands

The Azores have witnessed several migration waves. In the seventeenth century, many Azoreans emigrated to Brazil, Uruguay, the USA, and Canada. In the middle of the twentieth century, a quarter of a million local residents moved to Massachusetts and Rhode Island. Later they went on to the San Joaquin valley in California.

Migrants from the Azores founded settlements in the south of Brazil too (Porto Alegre and Florianópolis). An especially great number of Azoreans went to Brazil in the 1960s.

At the end of the nineteenth century, many residents of the islands emigrated to Hawaii and the San Diego region.

Between 2011 and 2013-й when Portugal was going through a terrible recession and unemployment rates grew, people left not only the Azores but the continental part of Portugal as well. Some of them moved to more secure western European countries while others went to America.

Since the Portuguese ‘golden visa’ program (legal residence program for foreigners) was launched in 2021, the situation started to reverse. An increase in the number of foreign investors in the Azores is expected to occur beginning 2022. The reason for the increase is the fact that large Portuguese cities (Lisbon and Porto) and the southern coast of the country have been taken off the list of places where foreigners can buy property in Portugal thus qualifying for legal residence in the country. Priority will now be given to rural areas and such remote underdeveloped regions of Portugal as the island territories: Madeira and the Azores. Foreign investors are welcome to put their money there.

Which island is the best one?

Tourist brochures often refer to the Azores as the best-kept secret in Europe. Each of the nine islands has features that make it adorable and unique. 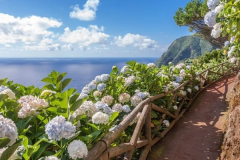 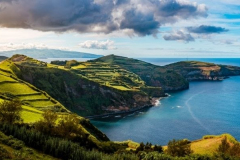 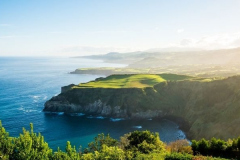 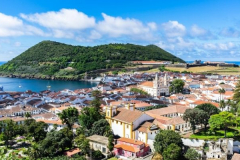 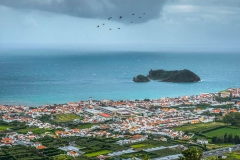 Every island is associated with a color. San Miguel is referred to as the green island as it is covered by vegetation. It is the most densely populated one and its largest city of Ponta Delgada is the economic center of the autonomy. The main places of interest are Lagoa do Fogo, Lagoa das Sete Cidades, and Vale das Furnas with their hot springs.

Santa Maria is referred to as the yellow island due to its sandy beaches washed by turquoise water. The island is abundant in breathtaking views. The best place for diving in Europe. The main places of interest are Praia Formosa, San Laurenzo Bay, Barreiro da Faneka, Poso da Pedreira, and Cascade of Aveiro.

Graciosa is the white island as whitish rocks stretch along the coastline there. Red-painted windmills are bright spots against the background of the white rocks. This is a small island where only 4 thousand people live. The main places of interest are the famous Caijadas da Graciosa, Furna do Encofre lava cave, and Furna da Maria Encantada small lava peak. A species of dwarf donkeys threatened by extinction dwells on the island. This could be a perfect island to live on with all its beauties.

Pico is the grey island and the highest island of all the Azores. Around 15 thousand people live there. The island is famous for the mountain with the same name that is the highest one in Portugal. Pico is also well-known for its wine: large vineyards surrounded by low basalt walls can be found there. The island is also known by the name ‘Isla Chinzenta’ and its unique landscapes have put it on the list of UNESCO world heritage sites.

Faial is the blue island because its valleys are covered by fields of sky-blue hydrangea. Capelinhos volcano is located at the westernmost end of the island. This is the Portuguese volcano that has erupted most recently in comparison to all others (in 1957). The island is also known as a seaport in the middle of the Atlantic. The main town of Horta looks impressive too.

Sao Jorge is the brown island due to its fertile brown soil and dark rocks. Nine thousand people live there and the landscapes are fascinating. A famous brand of cheese called Sao Jorge is made on the island. Besides, the only European plantation of spray coffee is found there. Velas is the capital of the island and it gives a fantastic view on Mount Pico. Water springs run right along the main street. One more tourist attraction on the island is Poza Simão Diaz in Fajan do Ouvidor.

Flores is the pink island because it is covered with rose and blue flowers. It is one of the few UENSCO biosphere reserves and it is also known as the ‘cascade island’. There is Pozo do Bacallão waterfall in Fajan Grande as well as Ribeira do Ferreiro lowland with more than 20 waterfalls. The most beautiful insula landscapes are to be found on this island.

Corvo is the black island and it is the smallest one. There is only one town there – Vila do Corvo inhabited by around fifteen hundred people. This is the best place for bird watching as many migrating bird species make stops there. The island is also popular with divers who like to explore its underwater lava formations. Visitors to the island are often surprised to find out that the only paved road leads to Caldeiran crater (the volcano erupted to form the island). There are two lagoons in the crater with small islands in them. Local people believe that these islands represent the nine islands of the Azores archipelago.

Real estate has been the most popular investment object in Portugal since the ‘golden visa’ program was launched. Even though the amounts of required investment into other types of property have been changed, the price that you can buy real property to qualify for a residence permit remains the same.

The restrictions that are going to be applied beginning 2022 are geographical ones. The property located on the southern coast of Portugal as well as that located in Porto and Lisbon will NOT qualify for the ‘golden visa’ program. That is to say, you will not be eligible for legal residence in Portugal even if you buy property worth EUR 500,000 in these places. All other regions of the country including Madeira and the Azores still qualify for the ‘golden visa’ program.

It is also important to note that the geographical restrictions do not apply to commercial property and tourist facilities.

The reason why these restrictions have been introduced is the impact that the foreign investments have had on the real estate market in the aforementioned regions. When the immigration program was launched, Portugal needed foreign investments badly, as it tried to overcome one of the worst crises in the history of the country.

The local Government was doing its best to promote tourism development and attract more foreign direct investments. As a result, the sales and rent prices rocketed. This fact drove many local people away to more remote districts, as they could not afford the increased housing costs. Ironically, the foreign investments made locals suffer!

The fact that foreigners are no longer able to buy property in the most popular regions is going to increase the demand for real estate in other parts of Portugal including the Azores. Experts expect that the prices for property on the islands are going to grow together with the demand. This is why we recommend that you should not postpone purchasing property on the Azores for two long. The best part of the autonomy is classified as an underdeveloped territory so currently you can purchase property there at the lowest cost that will make you qualified for legal residence in Portugal and in the rest of the EU.

If you make an investment in the Azores in the required amount, you will be issued a golden visa that is going to be valid for one year. After that, you can extend it for two years again and again if you keep the property in your possession. Another condition is that you should spend 14 days in Portugal every two-year period.

After purchasing property on the Azores, you can apply for a golden visa to Portugal by submitting documents to the immigration authorities. In addition to the official application form, you will have to submit the following papers:

In addition to that, you have to demonstrate your commitment to keeping the property in your possession for at least five years and supply proof of investment. You can provide the following documents, for example:

Please request a consultation on acquiring legal residence in Portugal by investing in the Azores. Please write to us to info@offshore-pro.info or use a messenger to contact us.

Who can apply for the Portuguese golden visa by investing in the Azores?

The program is designed for citizens of non-EU countries. In order to qualify for the golden visa, the foreign national has to make an investment in the Portuguese economy in the required amount and spend fourteen days in the country over a two-year period.

Why should I invest in the Azores when applying for the Portuguese golden visa?

The Azores is a Portuguese autonomy that enjoys some economic and fiscal benefits. The islands classify as an underdeveloped/ sparsely populated area, which makes the investment amount required for a golden visa lower. Besides, it is a highly popular tourist region and investing in tourist facilities is always a good idea. As the popularity of the Azores with foreign investors is expected to grow, so are the prices for real property in the islands. This is a good reason for investing in the Azores right now.

What island of the Azores is the best for investment?

The Azores archipelago consists of many islands, nine of which are inhabited. Each of the nine islands has its own attractive features and offers certain unique advantages. InternationalWealth experts will be happy to discuss the pluses and minuses of each island with you.