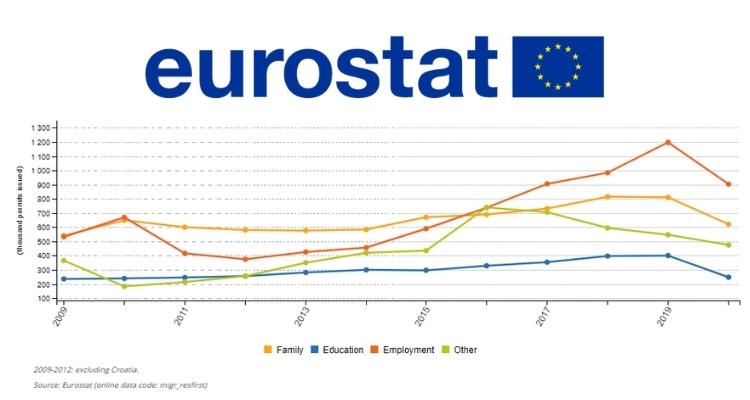 The latest Eurostat report regarding residence permit issuances throughout the EU in 2020 has some very interesting statistics, ones which highlight the vast double standards the EU lawmakers in Brussels tend to take in their stride when assessing investment migration.

The EU’s HQ has made its stance towards investment migration clear; it does not like it. Mainstream media remains divided, but a significant portion jumps on the bandwagon to tarnish residency and citizenship by investment (RCBI) programs as an open pathway for ill-doers to enter the EU’s borders. This claim, while remarkably false, has played a part in tarnishing the good name of RCBI.

Nevertheless, one only has to take a quick gander at the Eurostat report to understand that the EU practices double standards when assessing immigration routes, an issue that should be discussed – and solved – quickly.

The report shows that in 2020 a staggering 2.2 million first-time residence permits were issued throughout the EU. Eurostat focuses a bit on the fact that the number went down from 3 million residence permits issued in 2019, but I want to focus on another angle.

One of the main issues was that out top ten nationalities who obtained resident permits, one is on the EU’s high-risk third countries list (Syria), while nine of the remaining top ten are undergoing review.

So, if the EU has no problem bequeathing tens of thousands of residence permits to nationalities through family, employment, education, or the comprehensive “other” routes, why does it make such a fuss about those coming in through RCBI?

Well, there is no clear answer to that, and I have yet to read a convincing study that shows that RCBI holds a higher risk than any other immigration stream available.

As a matter of fact, RCBI applicants undergo stringent due diligence that other immigrant routes do not care to pursue. An RCBI applicant has to prove their source of funds, clean criminal background, and provide comprehensive financial dependency information for their family members.

RCBI programs also have more complex due diligence processes. Malta’s citizenship by investment program, for example, has a four-tier due diligence process that leaves nothing to chance. I seriously doubt a person applying for a work permit as an employee would go through the same rigorous checking.

But the issue is not just about the process; it is in the numbers. If the EU is fine with providing millions of resident permits each year, why does it gawk at the few thousand RCBI applicants coming in?

I am not saying everyone who obtains a residency through RCBI is a good person, nor am I saying anyone who gets a residency through a different route is bad. Generalizations are a hazardous business. What I am saying is, based on the probability of a person being a bad one, wouldn’t the probability of letting in a bad person rise exponentially by giving out massive amounts of residencies, especially those given to people from high-risk countries?

Take Portugal as a prime example. The Portuguese government issued approximately 84 thousand residency permits in 2020 alone. The Portuguese Golden Visa was responsible for 3,225 of those (including family members), which accounts for just less than 4%. Yet the government focuses on the risk these 4% carry and don’t care to mention the remaining 96%—double standards.

An even playing field

One (dull) argument against RCBI is that if a person who obtained a residency through other means turns out to be a problem, the country can just take away their temporary status. However, a person who obtain a permanent residence permit or citizenship through investment is free to do what they want.

Let me just start by saying that this assumption is entirely wrong. RCBI applicants who turn out to be on the bad side of the law can still get their residence permit or even citizenship revoked; just ask Cyprus, a nation that has launched an investigation into some bad doers and is now swiftly revoking passports.

The investigation is going through all Cypriot citizenship by investment applicants—all of them. Let’s say an IT employee with a work permit turned out to be a bad apple. Would the country investigate all those who obtained a work permit? Never. This is another testament to the viligance of RCBI within the EU.

RCBI programs have to maintain their integrity, not only for their survival under extreme pressure by the EU, but to remain attractive to foreign investors. This endless loop means that the probability of getting a rotten apple through RCBI is slim. It is still there, but it is much more mitigated than just handing out hundreds of thousands of visas to illegal residents to scratch the conceits of those in Brussels.

RCBI remains a strict, complex, and evolving process for EU nations to get the world’s elite. If the EU Council stood behind it rather than against it, RCBI programs would be lauded for bringing in the best the world has to offer, a statement it can prove with numbers and facts, rather than just assumptions.

About the author: Peter Hammeran spent years consulting for European family offices and an experienced consultant in residence and citizenship by investment matters. He is a member of the International Wealth team of experts. If you would like to set up a consultation on citizenship matters please contact info.en@offshore-pro.info or WhatsApp one of the numbers at the top of this page.